I promised to do a bigger tear down of Wikipedia’s coverage of currents events like Robin Williams’ death and the protests in Ferguson, Missouri this week, but I wanted to share a quick result based on some tool-development work I’m doing with the Social Media Research Foundation‘s Marc Smith. We’re developing the next version of WikiImporter to allow NodeXL users to import many of the multiple types of networks in MediaWikis: see our paper.

The links between the 276 articles that compose Williams’s hyperlinked article neighborhood have a lot of variability in whether they link to each other. Some groups around movies and actors are more densely linked than other articles about the cities he’s lived are relatively isolated from other linked articles. These individual nodes can be partitioned into groups using a number of different bottom-up “community detection” algorithms. A group is roughly defined as having more ties inside the group than outside of the group. We can visualize the resulting graph breaking the communities apart into sub-hairballs to reveal the extent to which these sub-communities link to each other. 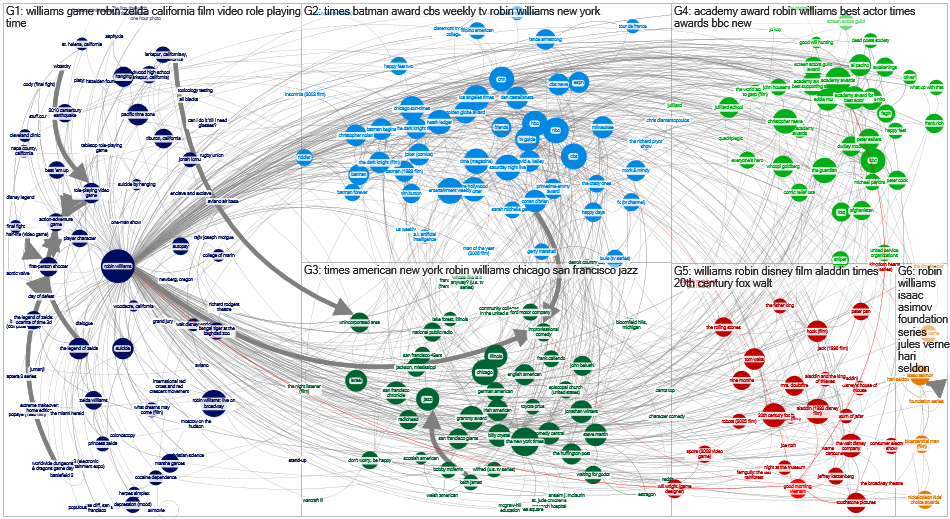 The communities reveal clusters of related topics about various roles, celebrity media coverage, and biographical details about places he’s lived and hobbies he enjoyed. But buried inside the primary community surrounding the “Robin Williams” article are articles like “cocaine dependence“, “depression (mood)“, and “suicide“. While these articles are linked among themselves, reflecting their similarity to each other, they are scarcely linked to any other topics in the network.

To me, this reveals something profound about the way we collectively think about celebrities and mental health. Among all 276 articles and 1,399 connections in this hyperlink network about prominent entertainers, performances in movies and television shows, and related topics, there are only 4 links to cocaine dependence, 5 links to depression, and 13 to suicide. In a very real way, our knowledge about mental health issues is nearly isolated from the entire world of celebrity surrounding Robin Williams. These problems are so peripheral, they are effectively invisible to the ways we talk about dozens of actors and their accomplishments.

In an alternative world in which mental health issues and celebrity weren’t treated as secrets to be hidden, I suspect issues of substance abuse, depression, and other mental health issues would move in from the periphery and become more central as these topics connect to other actors’ biographies as well as being prominently featured in movies themselves.